A guy, to me: “So, you’re into Central Asia and stuff, huh? I don’t know anything about Central Asia…you know, all those ‘stans and things that were part of the Soviet Union but no one talked about because they weren’t Russian Russian. But hey! I just got a map of the world shower curtain and I’m memorizing them. I think I can find , uh, Kazakhstan now. I’m good with Africa though.”

At least he’s trying. And to his credit, he could probably draw a decent political map of Africa freehand.

In other Central Asia blogging news, Joshua at Registan posted the trailer to  a documentary that promises to be equally ridiculous and offensive. It inspired me to create the following map depicting how America sees Central Asia. 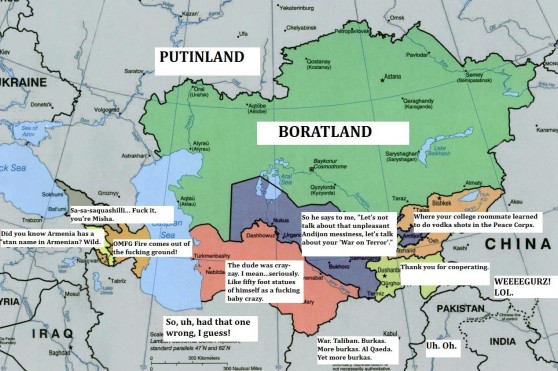